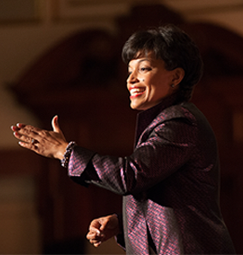 According to NBC Nightly News, Bonnie St. John is “One of the five most inspiring women in America.”

Despite having her right leg amputated at the age of five, Bonnie St. John became the first African American ever to win Olympic or Paralympic medals in ski racing, taking home one silver and two bronze medals for downhill events at the 1984 Paralympics in Innsbruck, Austria. She was honored at a White House reception for her Olympic triumph by President George W. Bush, was appointed by President Bill Clinton as a Director for Human Capital Issues on the White House National Economic Council; and in 2010, Ms. St. John once again represented the USA as a member of President Obama’s official delegation to the Paralympic Winter Games in Vancouver.

Bonnie St. John epitomizes the quest for balance between excellence in her public and private pursuits that eludes so many of us. She is a highly-sought-after keynote speaker, television and radio personality, business owner, and the single mother of a teenage daughter, Darcy, with whom she co-authored her most recent #1 best seller: How Great Women Lead.

Enterprise Bank is delighted to have Bonnie St. John serve as the keynote speaker for the 2013 Celebration of Excellence.